Skip to content
Processing…
Success! You're on the list.
Whoops! There was an error and we couldn't process your subscription. Please reload the page and try again.

Too often we think that childhood dreams and fears are lost when we become adults. But the truth is that they do follow us, just in different forms than we originally imagined them. Fears are always there. They develop along with us. One of these is the fear of the Bogyman.

Fears Are a Part of Life

As a child, I feared only what my older brother made me afraid of. I used to not fear the night until he told me Bigfoot was in the woods around our house. We lived way out in the country with only one light between the house and the barn. He told me that tale, and I was slightly skeptical. Then he suddenly wanted his hat that was in his “monster” truck. This desire came right before I was to get ready for bed. but my brother was eighteen years older than me, and I adored him. After this night, I began to hate him. He sent me out. The truck did have wheels that gave it a monster truck look. For a five or six year old, this truck was massive. I had to literally climb to get to the door and open it. Once I had his hat in hand, I began the climb down. My gangly legs hung down, searching for the ground. A growl and a rough hand. A scream. And he was rolling on the ground laughing at me while I screamed and sobbed. My mother about killed him, but then he held me close and soothed my tears. Jerk.

The bogeyman of my childhood was mostly my brother. But every child has a bogyman. Some fear the creature they know lurks under their bed that will come out after they fall asleep and devour them. We have never seen him, but he is there. We’ve heard him. We’ve sensed him.

He could be in the closet or anywhere that is not easily accessible by lights or open for us to see clearly. It is the unknown that we fear. We just don’t see it in that frame of mind. We just know there are monsters out there just waiting to pounce on us. The we grew up and realize that the bogeyman is not under the bed or in the closet. He is everywhere else.

As adults, we laugh at the bogeyman under the bed. He’s not there. We’ve cleaned under there. We’ve searched. He’s not there, but then re realize that monsters come in many forms and can take up residence even in the brightest places right in plain sight. There are the monsters who are obvious once their true nature is revealed like violent criminals or serial killers who are caught. Then there are more subtle monsters.

Toxic people are adult bogymen. I began to develop bogyphobia in regards to them when depression began to set and the hurt of their disguised words was recognized. They can destroy self-esteem and even relationships and careers. There are times I begin to have physical reactions to the fear of being in the same room with these known bogymen. I’ll do anything to get away from them and find a safe place.

Then there is the bogeyman I found within myself. I could become my own worst monster. The number of times I was the reason for my own failure cannot be counted. I could discourage myself quicker than any bogeyman that roamed the world. I fear the unknown and what I’m not an “expert” in. That is quite a bit. I can’t control the future so tomorrow and next year could be a deep fear. I have low self-esteem so any comments to me or about me can be worse than the fear of being in a real scene from a Stephen King thriller. What I allow myself to be scared of can be stronger than any force on earth.

As a child, we overcome our bogeyman fear by facing those fears and revealing the truth. We look under the bed with the flashlight or we fill the space with boxes so no creature can hide there. We open the closet and shine the light in. We might rearrange the closet to make it less inhabitable for a chronic bogeyman. Then we take the power from the bogeyman and make him become tiny, small, and eventually a thing of fairy tales. Adults do the same.

I’m still facing the many bogeymen in my life. I’m still discovering ones that I didn’t know were lurking around. I continually go under my bed or into the closet to shine a light on the area and make it uninhabitable for my bogymen. But I will defeat each and every one. 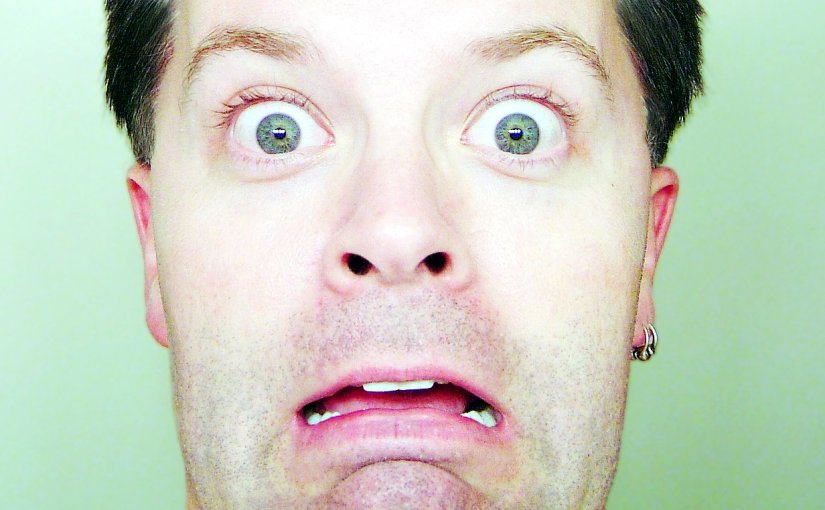 Too often, we think we know ourselves pretty well. After all, we are the only ones in our minds. Then we discover that we can even fool ourselves.

Snakes scare me to death. Even writing that sentence gave me the shivers. But now I find something that scares me more. Fear of not accomplishing everything I want before I die.

I’m middle-aged now. Suddenly, I see myself sliding down the hill instead of trudging upwards. There is no unlimited future in front of me. I see a time limit now. I fear not getting it all done.

I literally have a hundred or more story ideas to write. I have hundreds of crochet and knitting projects to attempt. Can I get them all done before I die?

I know it sounds crazy, but now that I’m nearly fifty, I wonder. I fear it. I don’t necessarily fear dying. I fear not doing everything I want to get done.

Have you ever had a deadline that was fast approaching? Panic usually accompanies that. I guess you could say that is similar to what I’m experiencing.

So, snakes still scare me. I can’t stand them, but I can avoid them. Time is something that nobody can avoid. What am I going to do? Make the best of it and get things done. Wish me luck.